A Denver to Dallas road trip was not originally in our travel plans. But traveling for a work conference to Dallas inspired some travel creativity: what if we fly into a different city, then road trip the rest of the way to Dallas? After looking at a map, crunching the numbers, and determining the logistics, we decided to fly into Denver. I share more details of how we did this in my Desk Departure tip.

[If you’re trying to brainstorm ideas of what to do on your Denver to Dallas road trip, scroll down to the end of the post, where I have a list of all my ideas + a map that shows where everything is in correlation to the route.]

Our Denver to Dallas Road Trip

As this road trip was an extension of my business travel to Dallas, our personal travel time was limited. Arriving late Friday night, we had Saturday, Sunday, and Monday to complete the Denver to Dallas road trip. Due to time constraints, we opted for the quickest route. Had we an extra day or two, we would have made stops in Santa Fe and Albuquerque. More on that toward the end of the post.

In three days, here’s what we did on our Denver to Dallas road trip:

Due to wintry February conditions, accessibility was limited. We hiked the snowy Bear Lake Trailhead, watched elk at Moraine Park, admired the views from Many Parks Curve, and walked around the geographical wonder of the Alluvial Fan.

the stunning view of Moraine Park

a snowy hike around Bear Lake

An Evening in Boulder

As Boulder is along the route back to Denver, it’s an easy pit stop after a day exploring the Rocky Mountains. A bustling downtown energy and abundant food scene, the few hours we spent in Boulder was enough demonstration to validate why the city is always ranked highly in quality of life surveys.

We ate at Eureka! on Pearl Street, a mid-sized establishment with tasty burgers and local beers.

At over 14,000 feet, Pike’s Peak towers above Colorado as the highest summit in North America of the southern Front Range of the Rocky Mountains. Among the most visited mountains in the world, Pikes Peak is famous as the birthplace of song lyrics America the Beautiful.

The scenic Pikes Pike Highway snakes up the mountain to the summit, with heights and views that are adrenaline-inducing and palm-sweating. As someone with a general fear of heights, there were a few moments when my stomach dropped and I audibly expressed said fear with a few choice phrases.

For someone who has spent little time in the mountains, these views were unlike anything I’ve seen. Paradoxically, standing atop Pikes Peak provoked an overwhelming sense of smallness and tallness, a feeling I’m sure only mountains can inspire.

Pro Tip: Call in the morning to see if Pikes Peak Highway is open prior to arriving.

Known as the Grand Canyon of the Arkansas, the Royal Gorge is a (supposedly) stunning canyon along the Arkansas River near Cañon City. Only two hours from Pikes Peak, this is a natural detour along the Denver to Dallas road trip route. We asked a waitress in Denver if it were worth the stop and she raved about it’s beauty. What we didn’t know is that Royal Gorge Bridge & Park has developed into bit of a tourist attraction, with kitschy shops and overpriced activities for children. We expected it to be a simple canyon, but it turns out the area has been quite built up by entrepreneurs trying to make a dollar.

The bridge at Royal Gorge is the highest suspension bridge in the United States. Tickets are a hefty $23 to cross the bridge, with a movie of the bridge’s history and construction on the other side.

The day we visited, an unexpected ‘freezing fog’ swept across southeast Colorado. Since we were able to see Pikes Peak before the fog rolled in, we hoped that the two hour journey would end in some weather change. We called the Royal Gorge visitors center, but no answer. All hope was invested in a fog-free arrival. Alas, that was not the case. Fog shrouded the canyon and the bridge. The Visitors Center offered discounted tickets due to the limited visibility, but spending $30 for the two of us to see essentially nothing wasn’t worth it. So disappointing. We decided to spend that money on dinner instead.

Behind me is the Royal Gorge Canyon. Gorgeous view, right?!

During my Denver to Dallas road trip research, several forums recommended a meal in Pueblo, specifically for its green chili. Apparently there’s something unique about this Pueblo green chili that can’t be found anywhere else. Two restaurants consistently recommended were Cactus Flower and Jorge’s Sombrero.

Eventually we encountered one open Mexican restaurant in Pueblo. We ate our delicious green chili dinner as the Superbowl played on the TV.

New Mexico ranks high as a state I dream of exploring deeply. Unfortunately the timing of our road trip did not allow enough hours to veer off our route to explore the state. Because of this, I knew we needed to stay somewhere with unique New Mexican charm, not your standard Holiday Inn.

Hotel Eklund in Clayton, New Mexico transported us back to the gunslinging wild west days of the 1800s. Originally a saloon and gambling hall, the building was expanded by Mr. Eklund at the turn of the century to include guest rooms. Hotel Eklund appeals to the imagination, whose historic artifacts and past-time decor inspire guests to wonder what events transpired before. It’s the kind of place that makes you say, “if walls could talk.” There are even bullet holes still at the bar, over 100 years old.

Clayton, New Mexico’s claim to fame is intertwined with the botched execution of train robber Black Jack Ketchum. If you stay at Hotel Eklund, you’ll find snippets of that history among the hotel’s antiques.

Get Your Kicks on Route 66

Catch Historic Route 66 in Amarillo, Texas. Step out the car and stretch your legs by walking among the many restaurants and shops that feed into the Americana vibe of the famous road. This specific district of Route 66 is listed on the National Registrar of Historic Places.

Known as the Grand Canyon of Texas, Palo Duro Canyon cuts into the earth not far from Amarillo. While it would be easy to spend an entire day hiking and exploring this state park, if you’re on a time budget, there are some short circuit hiking trails that can be completed in 30 minutes or an hour. I suggest bringing a picnic lunch and plenty of water. The most joyous moment of our visit to Palo Duro Canyon was watching a road runner run across the road. Oh, the horribly punny jokes that followed…

I’ve always wanted to visit a ghost town. When I learned that Medicine Mound, a ghost town, was only a 15 minute drive off the freeway, I knew we had to make the detour. Now, my expectation was something you’d see out of a western film, of an entire town with saloon doors swinging in the wind and tumbleweed rolling across the dirt roads. Not the case. Medicine Mound has a few standing buildings complete with historical markers with preservation notices from a local historical society. There are definitely active residences near the “ghost” town (and we believe one such resident decided to drive by to investigate what business we had there). Still, it’s always fascinating to see abandoned places that remain standing.

The more impressive sight, in my opinion, were the massive mounds of earth that rose above the horizon in the distance. This, I learned, is where the ghost town acquired its name. These are the “medicine mounds” — conical dolomite hills — once revered by the Comanche natives as a place of healing and protection.

Bonus points for the unreal sunset gifted to us by Mother Nature.

Ideas for your Denver to Dallas Road Trip

Surprisingly, I couldn’t find one comprehensive website that would summarize potential routes or ideas for things to do and places to stop along this road trip. So here’s all the ideas I brainstormed in one place, to make it easier for you to plan your route.

Remember that you will be changing time zones during this trip! While there are many route options, if you’ve only got a few days, here were the options that we considered:

Route 1: Dallas to Denver via Amarillo

For the traveler on a time budget, this is the quickest and most direct route. Unfortunately your time in New Mexico will be brief, with few sites along the way. This was our route.

If your schedule is more generous with time, consider exploring more of New Mexico by continuing south to Santa Fe.

Route 3: Dallas to Denver via Albuquerque

Though significantly more indirect, there will be plenty more to see. One may think if they’re going to drive to Santa Fe, why not take the extra hour and just visit Albuquerque? I list it as a separate route because Albuquerque would be more than “just a stop.” One could easily spend days here (not that I know this firsthand, just based on what I researched).

Colorado Stops — things to do in Denver/Colorado

What recommendations or suggests do you have for a road trip from Denver to Dallas? Any other roadside attractions or stops worth exploring? Please add them in the comments so my readers can see additional ideas!

Don’t forget to pin it! 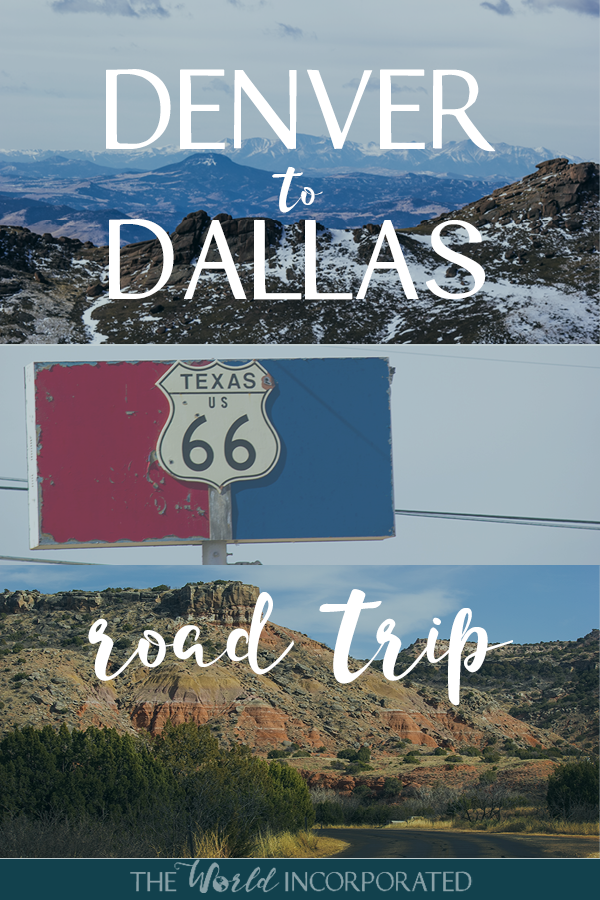 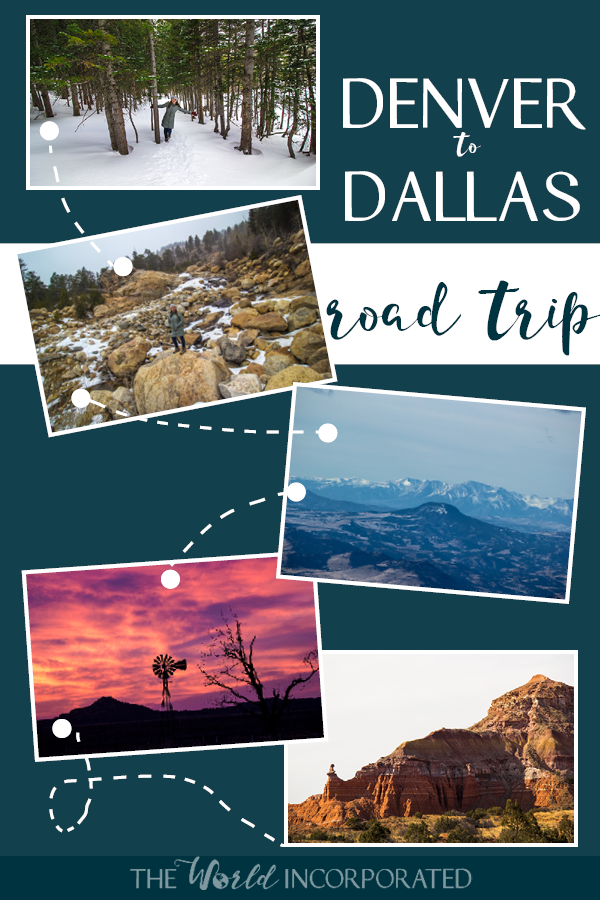 A Michigan travel blogger based in metro-Detroit proving that it is possible to travel the world with a full time job. Fueled by weekend getaways and vacation days.

A Weekend in Indianapolis

Chicken & Waffles in Austin, TX… Without a Side of Cockroach

A career woman with a travel addiction. Fueled by weekends and vacation days. For a long time I didn’t think I could balance a full-time job and travel the world. I’m doing both, and I’m sharing my secrets & stories so you can do the same. Michigan travel blogger based in Metro Detroit.